Bibles for children in Moldova/ Bijbels voor kinderen in Moldavie I just got back from visiting the village Chitcani noi. It is about 2 hours driving from Chisinau. It is a tiny little village but people are open to the Gospel. Together with some other OM-ers we visited different families and handed out bibles for children. Some children were shy, some excited but all of them promised that they would read the bible.
Vanya and Alexandru are two brothers who just got back from school and were helping their parents with looking after the cow and pigs. When we called them, they were a bit shy at the beginning but after that they happily received each their own bible and told us that since they just were finished doing their daily jobs around the house, they would go in the house and start reading right away! I told them that if they have any question about what they read, they can come to the Sunday school at the local church and learn even more about God. Lets pray that all the bibles given out today will be read and will have an impact in the lives of these children and their families.
Gepost door Spiridon and Stefanie op 19:10 1 opmerking:

Many weeks of the winter have past already and we had great warm weather until last week!
In the last week the temperatures dropped, and it is between -10C during the day and -15C in the night (maybe even colder). We also got last weekend a bunch of snow and so the world is white. It looks nice from inside but when you go outside it is just freezing cold!
Today the sun was out and this was nice but I was hoping that the car would start but no, probably to cold and the battery is to weak....poor car...
In our little house the temperature also got lower and lower and so we praise God for the hot shower and our little electric mattress and electric heater! 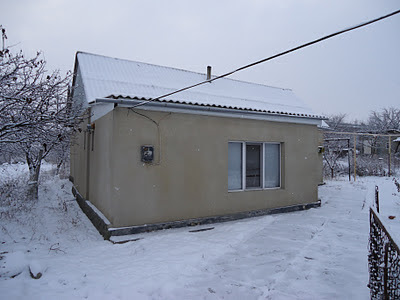 Now and than Spiridon and I plan an evening in which we do something fun together and this evening we went to an opera called Nabucco. It was an opera about how the people of God are having a hard life in Babylon and cry out to God and how God speaks through Zachariah to his people. It was in Italian and this made it a bit harder to understand but we enjoyed seeing the costums, the live music, the dramatic singing etc. 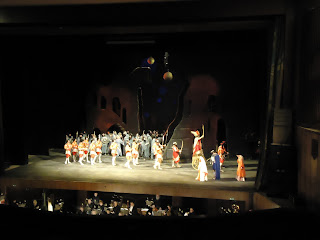 I really enjoyed the way they sung the crying out and praying towards God. Dramatic but with a lot of true words about the final hope that is in God and that He is the only One who can rescue and give real freedom!
Gepost door Spiridon and Stefanie op 23:19 Geen opmerkingen:

On the program for our team time it said that in the afternoon of day 2, we would go ice skating. Many people of the team were excited and so were we! We got to the ice skating place and found out two things:

1: Skating is not for people with big feet cause the largest skates are size 46 so after 5 minutes Spiridon was finished with skating cause his feet didn't quite fit normally in the skate.
2: In MD you do not need ice for ice skating, it can be done too on plastic! Looks like ice but is so slippery that Dutch people after 45 minutes just give up...

Mhh...not sure what to think about this kind of ice skating but I guess at the end we prefer the real ice for ice skating.... 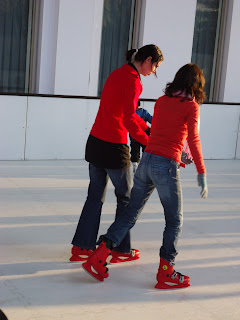 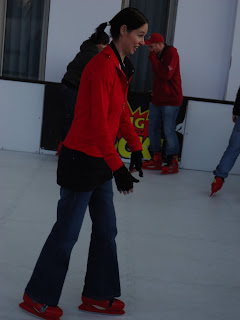 Tomorrow a new workweek starts again and this time we will have a different program. Not the normal, go to the office, start computer, check emails, make plans, Coffee break, more emails and project plans etc....

NO, we will do something totally different!
The whole OM Moldova team and OM Romania team is gathering tomorrow at 10 o clock and we will have two and a half day of team time. What will we do?
Bible studies, games, ice skating, good food, coffee breaks and more coffee breaks....

There will be also two special guests: Peter Maiden and his wife. Peter is the OM International leader and he will have some studies for us and altogether we hope that God will give us a blessed and relaxed time!

Visa for NL = received, Visa for Bangkok to get still!

Some of you know, some of you might not know but we are planning again to go on a trip in February. We will spend some time in NL and also we will be going to Bangkok to start a course called Joshua Journey. BUT before we can travel to far-away places...we need to get some visa's fro Spiridon.
Today Spiridon received again a 1 year visa for NL and so the first challenge is done. Now we start with the second challenge applying for a visa for Bangkok. Moldovians need to apply in Moscow at the embassy there but Spiridon got in contact with a lady from a Tourist Company and she is willing to help out.
So tomorrow we hope to bring all the papers that are needed to the lady and than we will pray for 10 days and than we will get answer. Another faith journey, before we can go on the actual journey.... 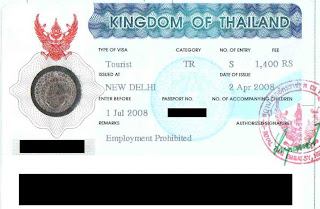 The normal workweek I was writing about earlier this week, went a bit different today! (yeah!) 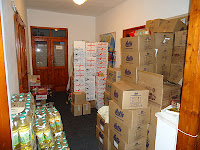 OM is blessed to help in the winter months around 1200 poor families and elderly with a food packet. The hallway in the office is packed with macaroni, sugar, washing powder, oil, rice, flower, cookies etc. Most of the packets are taken to the villages and given to poor families over there. 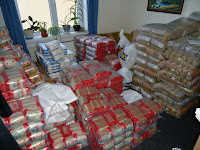 But 10 packets are for 10 families who live near the OM office. Often maybe I think that poorness is out in the villages and not so much in the capital city but today again I realized that poor people are everywhere... unfortunately...
This afternoon we went to visit Tamara and her family. 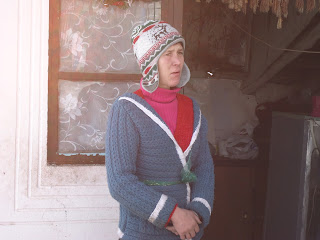 Tamara is maybe around 50 years old. She has a serious drinking problem and the director of the local school (who helped us to make a list of families who needed help) warned us not to leave the food with her because she would sell it and buy alcohol with the money. Tamara’s husband died a long time ago and so she raised her three children by herself. One of her sons left Moldova to work in Moscow, another son is working in advertising in Chisinau. He lives with his mother and with his salary, he helps to pay the bills. Tamara's daughter is called Olea. She is also living with her mother and she has two young children. Especially these two little girls are suffering from the bad conditions because of their grandmother's drinking problem.

Olea can’t work outside the house because she doesn’t want to leave her girls (4 years and nearly 2 years old) with her drinking mother. Olea's husband left her behind with the children and without a monthly income it is hard for Olea to take good care of her children. So the food parcel was most welcome!

I am happy that we were able to help this family just around the corner of the OM office. Please pray that our relationship with them would grow stronger as we continue this project throughout the winter.
Gepost door Spiridon and Stefanie op 20:22 Geen opmerkingen:

Dear yall,
Hope you are all doing fine and enjoying every day of the week! In the last week we have been working in the office and like any other office job, you just sit on a chair, work at the computer on different reports and project plans, write emails and respond to email. Not much to tell....But we pray that through all the office work more people will get involved through prayer, finances or even to come and help in Moldova. We pray that in the coming week, all of us, will be used again by God for His Glory. We wish you a great week!

While a big part of the world is trying to get back to the normal program of every day after the celebrations, in Moldova instead people are busy preparing again to celebrate Christmas! This weekend 7 and 8 January we will celebrate one more time that Jesus was born for us!
This afternoon, together with some other people from OM-er I traveled to the Day Center in Micleuseni and together with 15 children we celebrated Christmas with songs, games, a drama, presents etc. It was a great time and the kids were paying full attention!

Although you probably will not celebrate again Christmas this weekend, we wish you anyway another time a blessed Christmas and may God bless you! 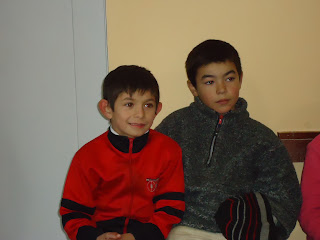 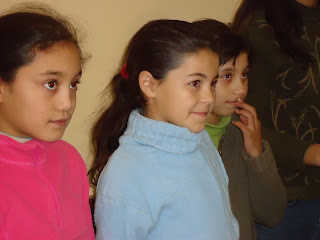 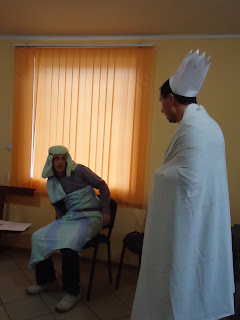 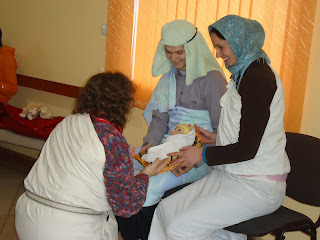 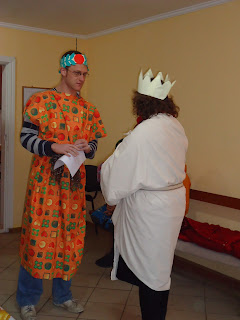 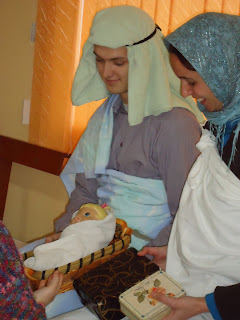 First of all we wish all of you a blessed start of the new year! We are excited to see what plans God has this year for us and we pray that God again will be using us for HIS Glory!
Some people say that in the year 2012 Jesus will come back....
Not sure if this is true...we will see...Marc 13: 32-33 tells us:

"But about that day or hour no one knows, not even the angels in heaven, nor the Son, but only the Father. Be on guard! Be alert! You do not know when that time will come."

So lets aim to be on our guard and alert! I hope that until the Lord Jesus comes back, we all will be able to share with many people about Gods Love, Forgiveness and fresh Hope for the future!