A large part of the world is celebrating this weekend Easter! The most amazing celebration there is, I think. In Moldova we stick to the orthodox calendar and so we will celebrate Easter in about 5 weeks. But anyway, I wanted to share an old song that describes what happened during Easter.


Praise God, HE is alive and we can be forgiven and free!

From December 2012 until March 2013 with help from about a 100 local churches all over Moldova many, MANY food parcels were distributed. Relationships were build, every month testimonies were heard about how people have turned to God after they has realized that He is the One who know them and cares for them. We praise God for all that has been done in the last winter and we are thankful that many lives have been blessed through a simple food parcel. Let us keep praying for all those families who experienced Gods Love! 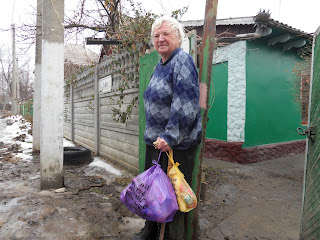 A lady that has received every month a food parcel is Elisabeth. She is an optimistic lady. You would think that she had all the reasons in the world to complain, being blind, missing her right arm, walking with a stick but no, she is remains joyful and humorous. She is a real encouragement and example for others and helping out where she can. She doesn't ask quickly for help and many daily practical chores she does by herself: laundry, cooking, cleaning, etc. She was married to an older man and they had two children. At the moment she is living with one of her grandchildren but she tries to live as independent as possible in her part of the house. When she was younger she was working in special factory for people with sight problems. While working with one of the machines a piece of metal got stuck in her arm and because it wasn't removes properly, after it got infected, there was no other option than to amputate her arm. Elisabeth owned an apartment but because it was too expensive to keep, she sold it and bought a small house at the edge of the town Cahul, in the south of Moldova. When it rains or snows nobody can get out or in her street by car because the road is so bad. The food parcels she received were of great help because all the money Elisabeth receives per month she spends to heat her house and so after paying for the heating, there is no money left to buy food. For the last 4 months Elisabeth was living from the food parcels and this kept her alive. She is very thankful for these life saving parcels.

Below a video about how the food parcels get delivered and how it impacts people's lives:

God and I are living together! 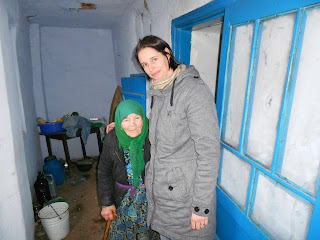 While I enter the garden of the house we are going to deliver a food parcel to, my shoes sink about 10 cm deep in pure mud. I am trying to keep my balance and not fall down in the mud, while holding the food parcel and making sure that the plastic bag is not tearing apart. Out of the small house comes a small lady, slightly bending over and leaning on a stick. She is curious who we are and why we came. After I explained that we came to see how she is doing and to give her a parcel, she points out with her stick where we should put the food. Alexandra is 83 years old, nearly blind and starting to forget more and more things. When we ask her if she can get for us her passport so we can write down her details on the list, she shacks her head and says: "if only I could remember where I hide my passport. I will need to have a look..." She goes back into her one room house and I follow her. The smell is quite unpleasant and everywhere is dirt. Alexandra starts to dig between the 3 mattresses that are laying on her bed. Different things like icons, socks, insurance papers, medicines etc are found but not her passport.... 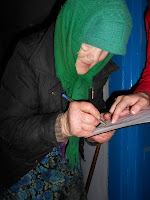 When I see that she doesn't know where to look anymore, I suggest that she just signs the list and it will be oke. She agrees and slowly we move again towards the front door. There she signs the paper. I ask her: "Do you live by yourself?" She straightens her back and replies: "Me and God live together here! I am never alone."
After we have taken a picture together with Alexandra (cause she likes to take pictures with Americans...;-), we leave her behind and return through the mud to the car. Alexandra remains at home with God near her...May God bless her! 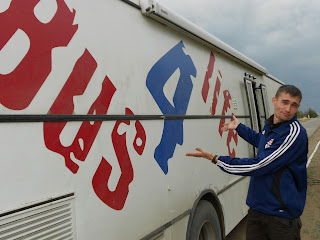 The bus is back in Moldova! Already some technical problems appeared and were conquered! Spiridon will work with the bus from Wednesday until Friday.

Many children, teenagers, adults and elderly have been visiting the bus so far. Let's pray for the team working with the bus: for wisdom and energy! Pray for the visitors that they will hear/ see/ feel God's Love and Grace.

Also here a link to a small videoclip about the ministry: Video Bus4Life. Enjoy and let's pray! 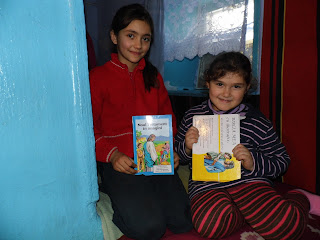 In the weeks before, around, and after Christmas hundreds of bibles have been given away to children who did not yet have one. Many of the children who received this great gift come to clubs organised by the local church and there they often hear about God and learn more about who He is. But when the children go home, they don’t have a Bible to read for themselves or to read with other family members about God. By giving out the Word of God we have made it possible for them to read whenever they want and to discover God for themselves!


Some small notes written by some children that received a Bible: 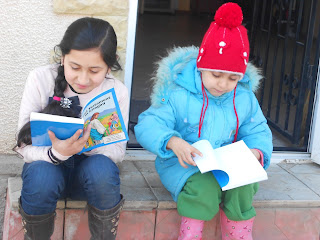 My name is Andreia and I am in the 5th class.  In my family only my brother has a Bible with illustrations. From today on I don’t have to fight anymore with him about who’s turn it is to read the Bible because God sent me a new and beautiful Bible which is easy for me to understand.

My name is Dan and I am 12 years old. At home I have many Christian books. Today I received a Bible but I will give this new Bible with nice illustrations as a present to my classmate so we will have something to discuss in our free time. 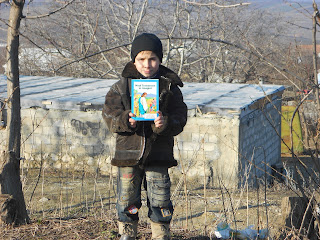 Let’s pray that all the Bibles that were given will bear fruit and change lives for His glory!

8 March is a big celebration day in Moldova: international women day! Many churches here use this occasion to organize special women meetings to encourage the women in their villages and evangelize. Also in Huzun and Micleuseni a special meeting was organized. At 11 o'clock in Huzun around 40 to 50 ladies, some men and about 20 kids came to enjoy the program. The program consisted of some songs about mothers and how special they are, a preaching about Mary and what made her special and at the end all the women received a nice Moldovan head covering. One lady had listened very carefully to the preaching and after the program had finished she came and asked of she could receive a Bible cause she would like to read for herself. Towards the end of the program, brother Nicu asked how the ladies would like it if there would be every Sunday a service in their village? The majority of the people present said in one voice: yes, please! 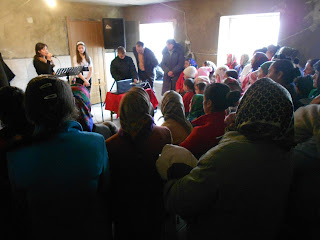 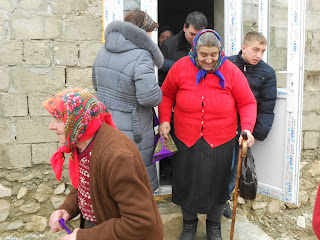 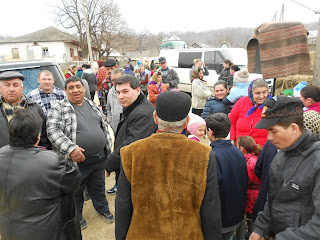 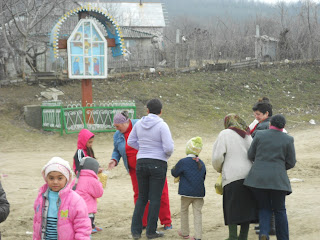 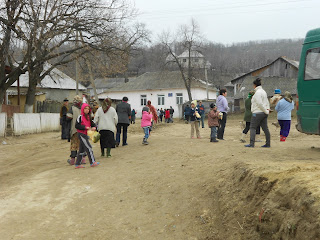 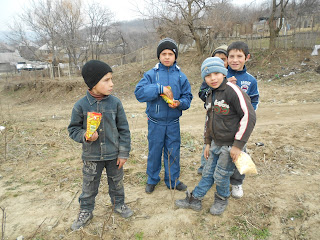 The work = in progress!

The weather is getting better outside and so also the construction could start again in Huzun. In the last week many manpower was used to dig a canalization, glue tiles on the floor and walls and to install a water pump to be able to have running water in the building.

The building is getting more and more fancy and the time has come now to buy some tables & chairs, a small kitchen and gas stove etc. Praise God that the work is going well and the results are beautiful! Not long until the opening of the church and Day Centre!...so to be continued soon.... 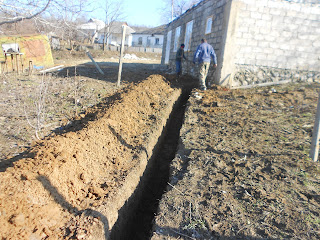 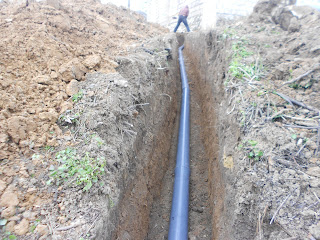 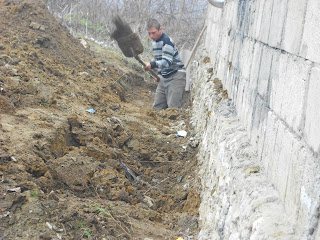 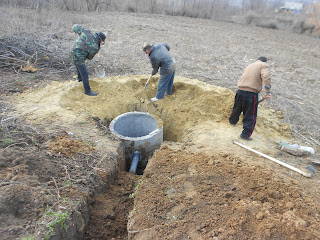 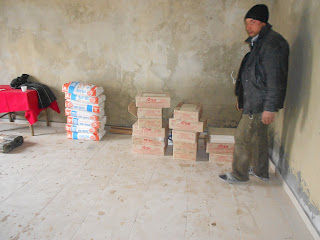 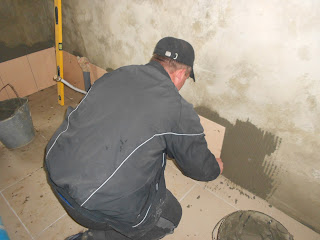 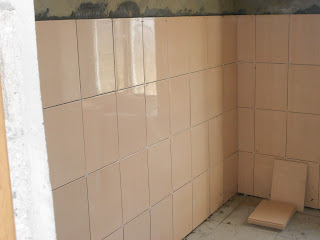 Annemarie learns how to walk 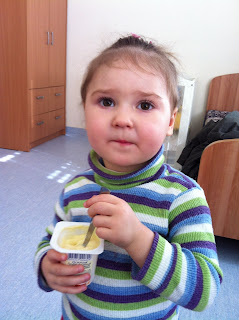 Annemarie is a little girl, 2 years old and full of life! Nothing wrong at first sight but...as a baby she received a vaccination in a wrong way and because of that some of her muscles cramped and didn't develop the way it should. While she was a small baby nothing was really observed but as she is growing up now, the results of the wrong injection becomes more and more clear... As other children learned to walk, Annemarie was only able to make some movements with her feet if she would be holding on to a wall. She never walked or ran normally. She is also not able to use her right arm. A very sad situation just due to a wrong way of injecting a vaccination.

Together with her mother, Annemarie has spend the last 10 days in a rehabilitation hospital in Chisinau, a place specially for children. The place looks very nice but the methods used to treat the children who come there are still back in time. Besides that also corruption is again part of the system. If you don't give extra money or even a box of chocolate to the doctor, no proper help is offered and you will be helped last....
Unfortunately Annemarie's parents don't have a lot of money and so this little girl wont get the best treatment. Through the massage and treatment she got in the last weeks, she is now able to hobble around without holding on to a wall but she has not yet learned to use her right arm. The chance that she will walk again or use her arm in a normal way is very small because her parents don't have the finances to bribe the doctors. 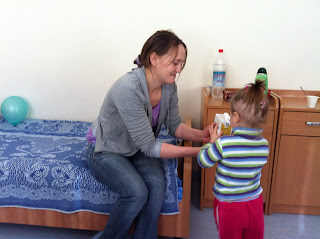 This year Annemarie needs to come at least 5 more times to Chisinau and stay every time for about 10 days in the hospital.

While visiting this girl and her mother in the hospital, I realized again how "unfair" things are and how due to a little mistake, the chances in life can turn out so different. I pray that God will heal this little girl and make her walk and run...

Spring has come and so also our new newsletter has come! See below link and enjoy reading: 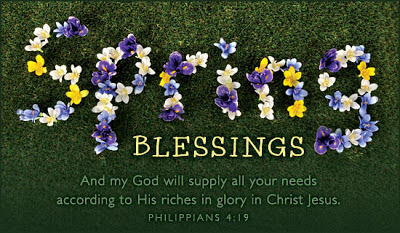 A new video about the ministry of OM MD

A new video clip has been made about the ministry of OM Moldova. Below you will find a link to the video. Watch and listen very carefully around minute 5! One of the highlights of the video, I would say!;-)